History of the Name

The French name Coeur d'Alene can be traced back to the early 1800s when David Thompson, of the North West Trading Company (a fur-trading concern), encountered French speaking Iroquois Indians already living here. Since the Iroquois were familiar with the area, he hired them as guides and scouts. The words Coeur d'Alene ("heart of an awl") may have been the Iroquois' attempt to describe the sharp trading practices of the local Schitsu'umsh people (an awl is a pointed tool used to pierce leather). Kootenai County's original boundaries were established on December 22, 1884. 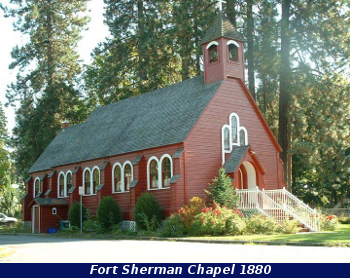 The first county seat was Sin-na-ac-qua-teen, a trading post located on the Clark Fork River (it was subsequently relocated to Rathdrum and later, in 1907, to Coeur d'Alene, where it remains today). Fort Coeur d'Alene (later renamed to Fort Sherman) was established in 1878; Coeur d'Alene City developed near the edge of the fort and within a few years had become a supply point and navigation hub for the mining and timber industry. Coeur d'Alene's importance as Kootenai County's center was reinforced when voters moved the county seat to Coeur d'Alene in 1908.