In 1997, Commissioner Ronald D. Rankin began his vision to create a lasting memorial to honor the service and sacrifice of Kootenai County veterans. He wanted also to remind those who came to the new Administration building and courthouse of the price of the freedoms we enjoy in America. The black marble "Killed in Action" monument lists hometown heroes from the Spanish American War through Vietnam who gave their last full measure on the battlefield. The laser-etched marble murals on the north wall depict epic battles of the United States military from World War 1 through Vietnam. The Hall of Heroes, inside the foyer, honors local Purple Heart and Medal of Valor recipients and includes informational material on the various battles.

Serving on the Board of Commissioners from 1997 through January 2002, Rankin was named Curator of the Veterans Memorial Plaza in 2004, donating his time to the position. He was most proud of the fact that the nearly $80,000 used to create the memorials was all private funding, with no public money used.

He was a combat veteran of World Ward 2 and Korea, serving with the United States Marines. A survivor of the historic battle in the Chosin Resevoir in Korea, Rankin was a member of the Chosin Few, the Marine Corps League and the Veterans of Foreign Wars.

At the time of his death on October 12, 2004, he was in the process of adding a laser-etched marble mural to the wall. Earlier this year the Rankin family took up the cause, raising the remaining funds needed and on Memorial Day 2005, the Iraq mural will be unveiled. It will be dedicated in memory of Specialist Robert T. Benson, killed in action Baghdad November 2003, the only Kootenai County causality of the Iraq War.

Commissioners Gus Johnson, Rick Currie and Katie Brodie will officially rename and dedicate the memorial to honor his memory on May 30, 2005. The Ronald D. Rankin Veterans Memorial Plaza will provide generations to come with a place to remember the sacrifice of so many throughout our nation's history.

"...that we here highly resolve that these dead shall not have died in vain; that this nation shall have a new birth of freedom; and that this government of the people, by the people, for the people, shall not perish from the earth." 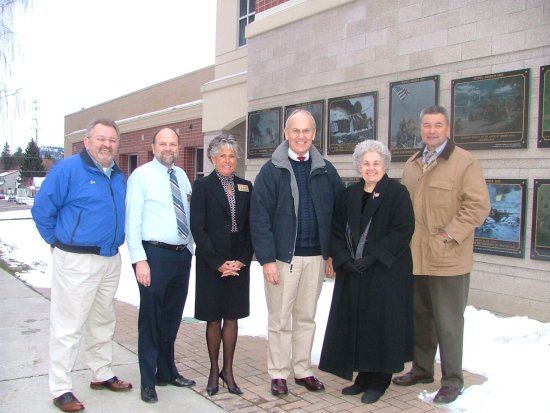