Land “actively devoted” to agriculture may qualify for the Agricultural Exemption, which aims to assess agricultural land at a value commensurate with what it will produce, rather than the price it will sell for. 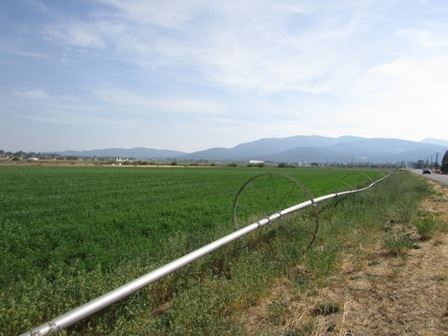 Must be ACTIVELY DEVOTED to agriculture and part of a BONA FIDE FOR-PROFIT enterprise. 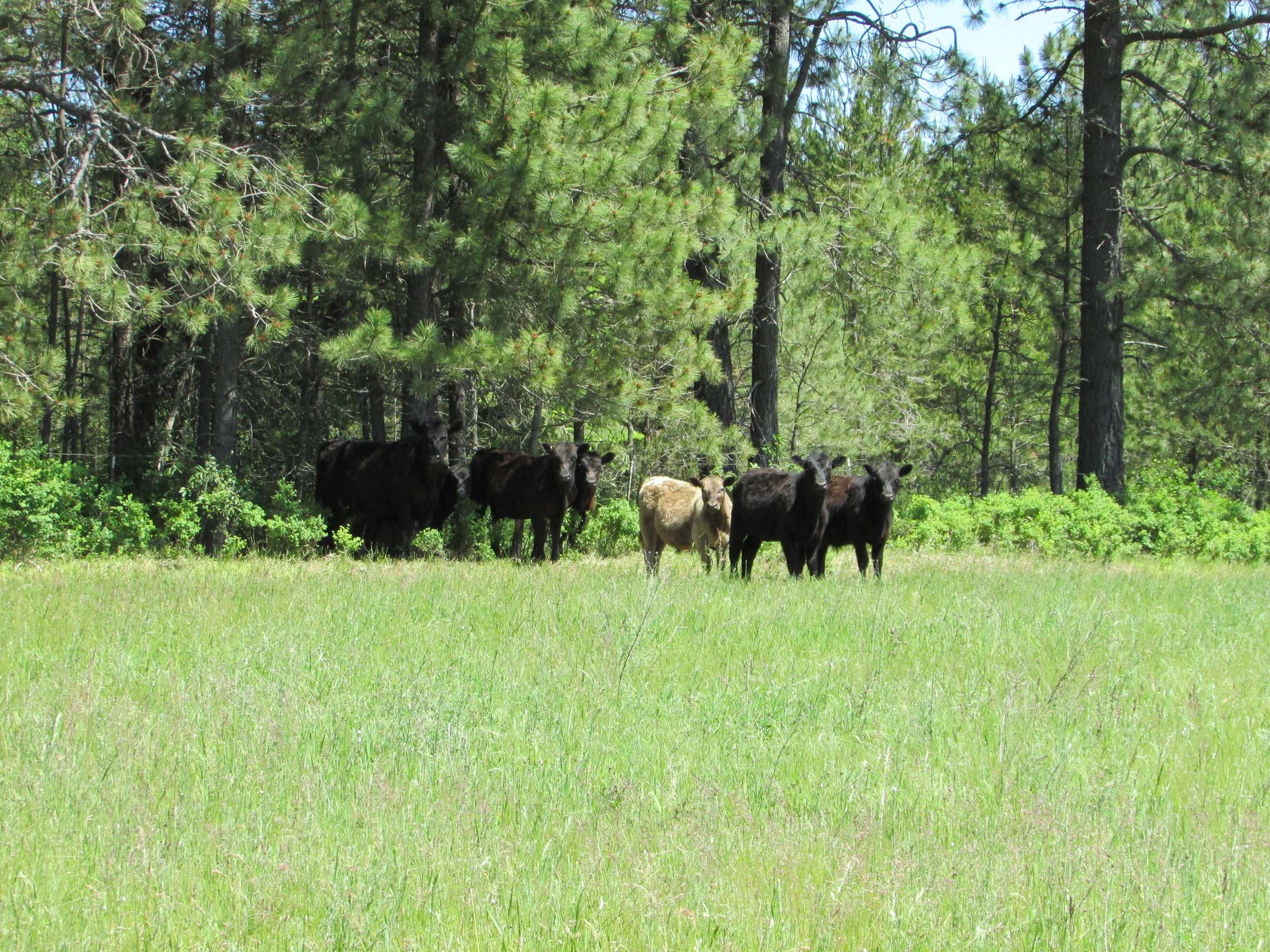 The total area of a parcel, including the homesite, is more than five (5) contiguous* acres, and is actively devoted to agriculture, which means:

(i) It is used to produce field crops (and/or)
(ii) It is used by the owner or bona fide lessee for grazing livestock to be sold as part of a net for-profit* enterprise
(iii) It is in a cropland retirement or rotation program.

The area of such land is five (5) contiguous* acres or less and such land has been actively devoted to agriculture during the last three (3) growing seasons; and

(i) It agriculturally produces for sale or home consumption the equivalent of fifteen percent (15%) or more of the owner’s or lessee’s annual gross income; or
(ii) It agriculturally produced gross revenues in the immediately preceding year of one thousand dollars ($1,000) or more.
(iii)  Landowner must provide proof of these minimum incomes annually to remain in qualifying status, due April 15th.

LAND USED FOR GRAZING HORSES OR OTHER ANIMALS KEPT PRIMARILY FOR PERSONAL USE OR PLEASURE SHALL NOT BE CONSIDERED.

LAND PART OF A PLATTED SUBDIVISION WITH STATED RESTRICTIONS PROHIBITING AGRICULTURAL USE SHALL NOT BE CONSIDERED.

*”Contiguous” means being in actual contact or touching along a boundary or at a point, except no area of land shall be considered not contiguous solely by reason of a roadway or other right-of-way.

*"For-profit" means the enterprise will, over some period of time, make or attempt to make a return of income exceeding expenses.

If grazing ground is timbered or there are small areas of timbered ground included in the acres classified as cropland, the landowner will be required to pay a 3% yield tax on timber harvested and delivered to a mill. The agricultural rates per acre do not account for potential income from the trees. The total taxable value depends upon the species of trees and the quantity harvested (by the thousand board feet). Yield tax bills are processed bi-annually.

The first-half billing covers the period of January 1st – June 30th. Bills are mailed in October and are due December 20th.

The second-half billing covers the period of July 1st – December 31st. Bills are mailed in March and are due June 20th.

Call the Timber and Agricultural Department 208.446.1526 or email us at kctimberag@kcgov.us .

Initial application must be made by  APRIL 15th   of the year in which the owner is seeking the agricultural classification for. 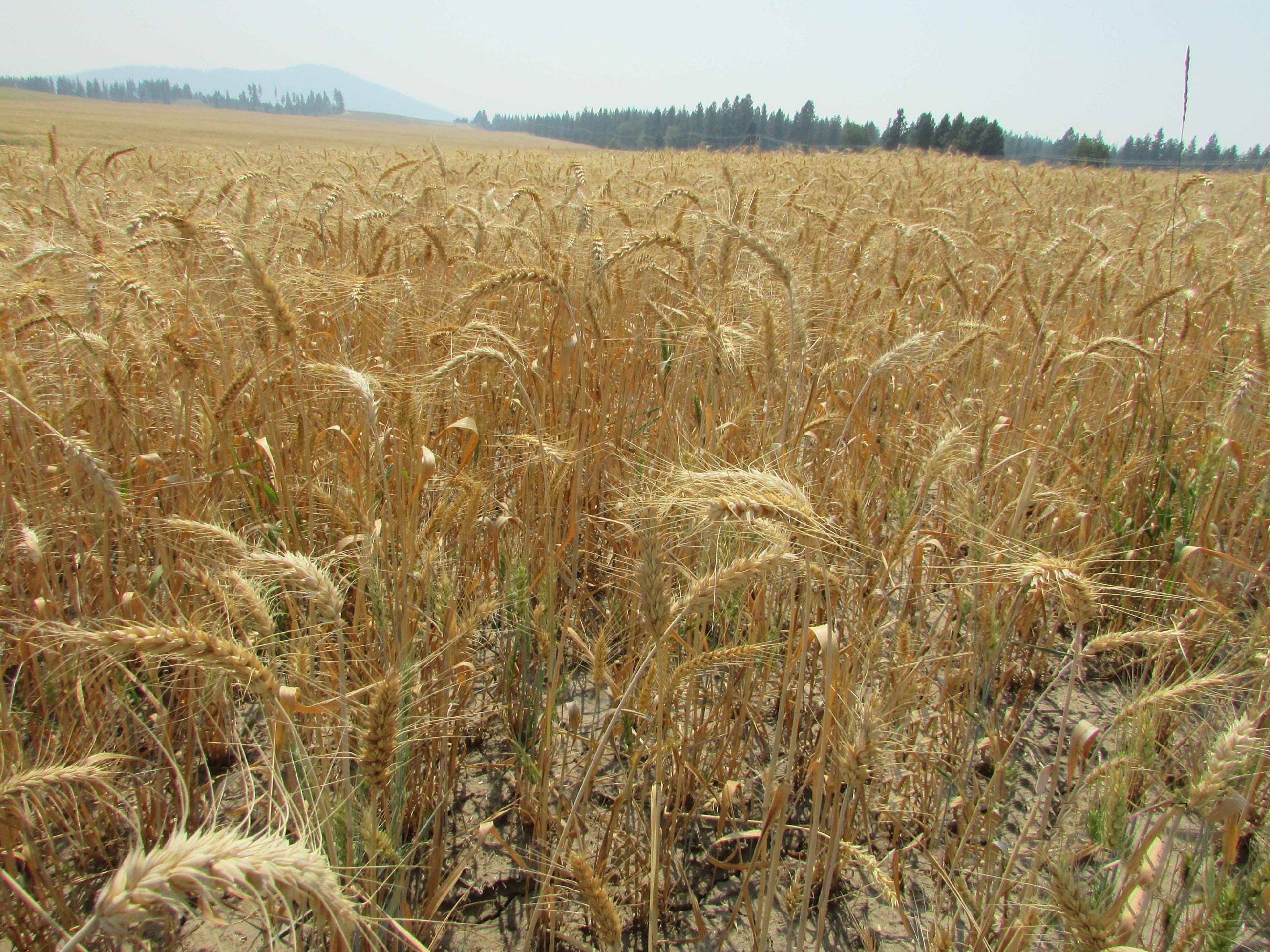 (i) Fill out the pdf form below and email or mail in:

(iii) If you do not have internet access, please call the department as soon as possible and we can send you the forms in the mail, or you can stop by the office. 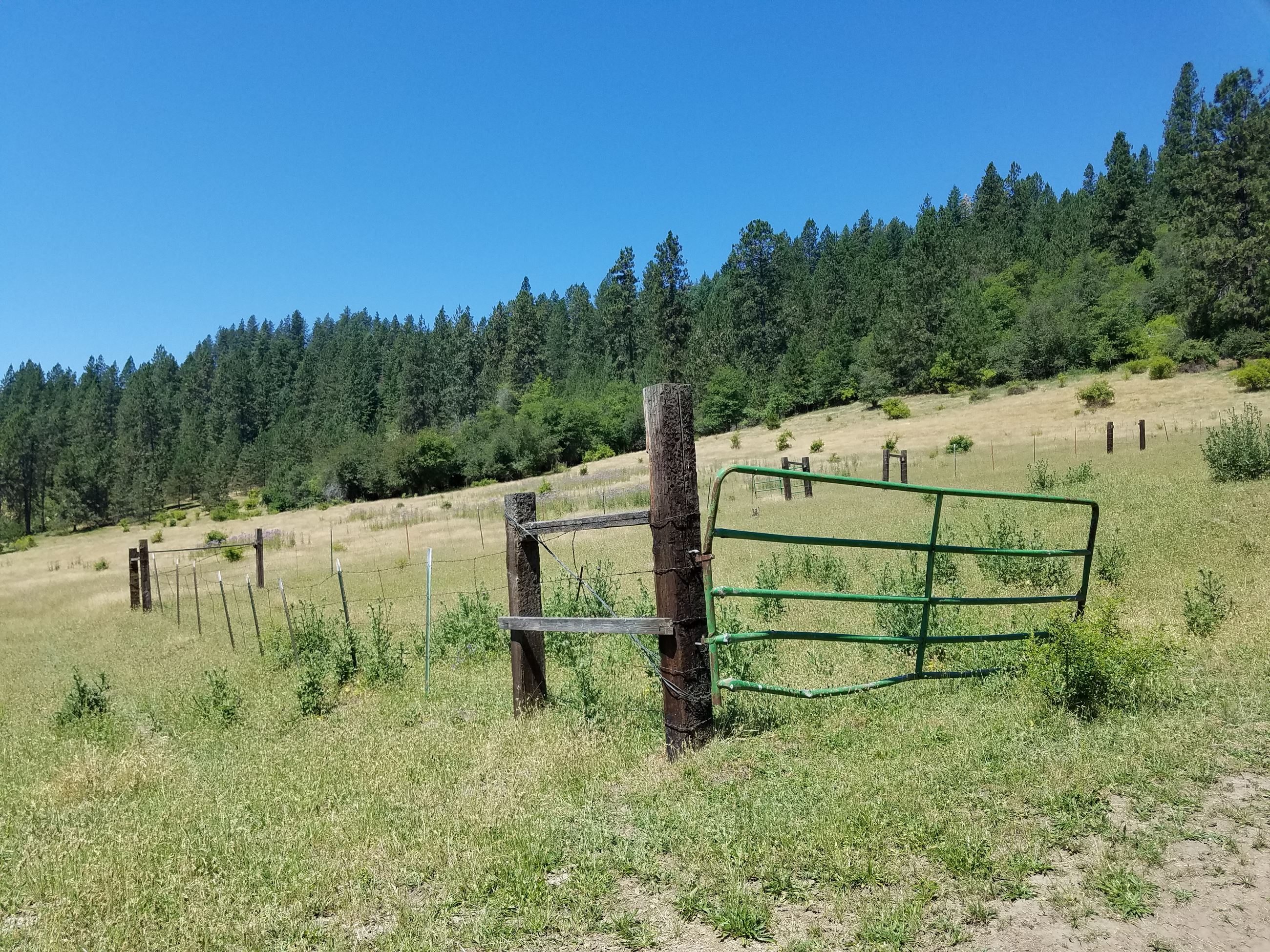 Inspection Prior to Approval:

Your land must be accessible for inspection prior to approval. We require a phone number/email on the application for this reason. It is not public information and is only used to notify the landowner prior to coming onsite or of any issues with their application or exemption. Inspections will take place in the spring near the deadline. Parcels will only be accepted if they are in qualifying order at the time of inspection.

All lease agreements, CRP contracts or FSA payments must accompany your application or it will not be considered.

Call the Timber and Agricultural Department 208.446.1526 or email us at kctimberag@kcgov.us . 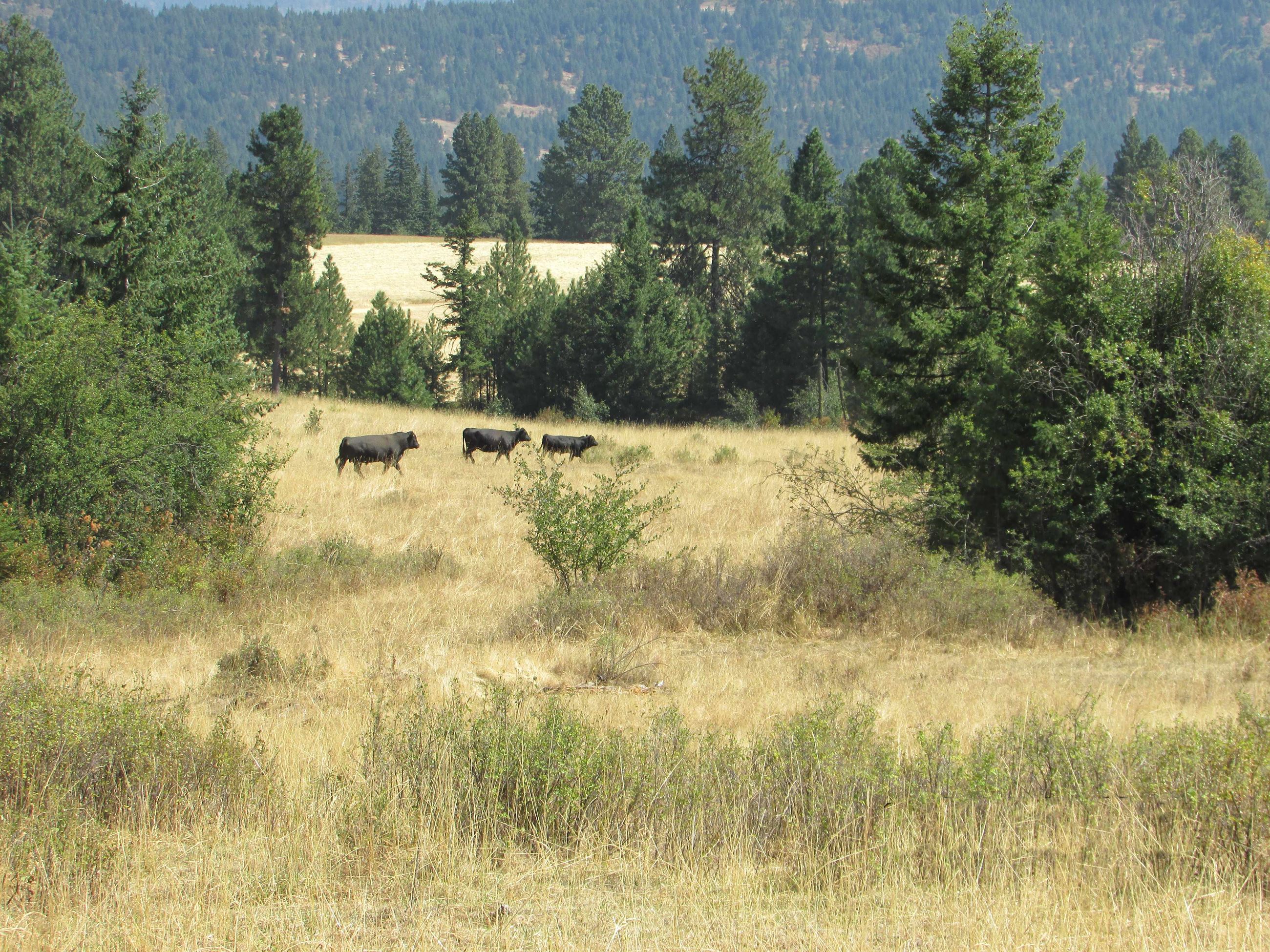 1. Can I Have Multiple AG/Timber Categories on One Parcel?

Yes. For example, if you have a 10-acre parcel that has an area of forestland and an area that you farm, you can put 5ac into the timber exemption and 5 acres into the agricultural exemption.

You cannot, however, have both exemptions on the same piece of ground. For example, if you have 10 treed acres, and you graze cattle throughout the trees, you will have to choose either the grazing or the timber exemption. Keep in mind that in an instance such as this, if you choose to go into the grazing exemption and at some point decide to harvest some of your trees, you will have to pay a 3% yield tax on whatever you make from the mill.

2. Do Bees Qualify for the Grazing Exemption?

No. The amount of acreage that qualifies for grazing is based on how much of your parcel is fenced and is being actively grazed. There is no way to know where and how many bees are “grazing” and if they are truly using your parcel or your neighbors.

No, you do not have to re-apply annually. The land remains in the program for as long as a landowner actively manages it as agricultural land, whether or not it produces crops or is in rotation. When land is removed from this program, it is then assessed at full market value. The landowner is not required to pay back taxes on the difference in value between full market value and the lower taxable values placed on the land while it was in the program. If your parcel is less than 5 acres you are required to provide proof of income annually by April 15th.

4. Do Wildlife Preserves or Conservation Agreements/Easements Qualify for an Exemption?

If you have a private, 501(c)(3)non-profit corporation whose land is used for wildlife habitat, or a private, 501(c)(3) non-profit corporation whose land is under an active conservation easement/agreement, this land may qualify for an exemption similar to that of our agricultural exemption. Look over Idaho Code 63.604 and our “ADDITIONAL INFORMATION” tab for more details and the forms necessary to apply.

5. How Can I Measure How Many Acres I Have of Cropland/Pasture?

Our KCEarth Web Map tool allows you to see your property from an aerial view, overlaid with your property boundaries and other layers of your choice. If you are unsure how many acres your hay field is for example, you have the ability to draw a polygon around this area and it will provide you with that acreage.

6. How Do I Know I Am Receiving the Agricultural Exemption?

Assessment notices are sent out every year at the beginning of June. If you are in fact receiving the exemption, your notice will read one of the following depending on your agricultural enterprise:

7. How Do I Know Which Agricultural Form To Fill Out?

8. How Is Grazing Acreage Qualified?

The amount of acreage that qualifies for the grazing exemption is based on how much pasture is completely fenced and ready for livestock, and is currently being used or is in an active grazing rotation at the time of inspection. If you are unsure, use the measuring tool on KCWebMap.

9. How Will My Land Be Assessed Once I Am Accepted Into The Program?

When property is accepted into the agricultural program, it is classified as dry cropland, irrigated cropland, dry grazing, or irrigated grazing. There are a number of different assessment rates that apply to the land according to its ability to produce crops or grazing grasses. The value is calculated by multiplying the acres in the program by one of these rates, which are lower than the per acre rates for full market value, to obtain the taxable value. These rates are based on the income approach (potential income from the land), are provided by the State Tax Commission, and change each year. This program does not provide a true exemption but a reclassification according to the land's agricultural use. For more information on your savings, call the Timber and Agricultural Department 208.446.1526 or email us.

10. What Are The CRP And FSA Programs?

Questions regarding these two programs can be answered by visiting the following links:

Landowners who participate in one of these programs are eligible for our agricultural exemption provided they include an up-to-date contract with their application.

11. What Documents Suffice As Proof Of Income If My Parcel Is 5 Acres Or Less?

You are required to show one of the following: copies of income tax returns with Form F-4 attached copies of cancelled checks. If you are unsure, the Timber and Agricultural Department 208.446.1526 or email us.

12. What Does Contiguous Mean?

Contiguous means being in actual contact or touching along a boundary or at a point, except no area of land shall be considered not contiguous solely by reason of a roadway or other right-of-way.

You can find this information by searching your name or address in our Parcel Information Search webpage. Here you can find your deed, plat maps, AIN # and Parcel #.

14. Why Is My Phone Number Required On The Application?

In order to qualify for the exemption you must agree to have your parcel inspected by the agricultural appraiser to ensure compliance. Your phone number or email is required at initial application to allow the appraiser to give you notice prior to coming out and inspecting. This information is not public and will only be used for inspection purposes, information on accessing your parcel or if there are any problems or questions regarding your exemption.

15. Will I Have To Pay a Yield Tax At Any Point On Agricultural Ground?

If the grazing ground is timbered or there are small areas of timbered ground included in the acres classified as cropland, the landowner will be required to pay a 3% yield tax on timber harvested and delivered to a mill. The agricultural rates per acre do not account for potential income from the trees. The total taxable value depends upon the species of trees and the quantity harvested (by the thousand board feet). Yield tax bills are processed bi-annually.

The first-half billing covers the period of January 1st – June 30th. Bills are mailed in October and are due December 20th.

The second-half billing covers the period of July 1st – December 31st. Bills are mailed in March and are due June 20th.

Call the Timber and Agricultural Department 208.446.1526 or email us at kctimberag@kcgov.us.

If you would like an example of what a basic agricultural lease looks like, look over our SAMPLE AGRICULTURAL LEASE.

Every 5 years the Assessor’s Office sends out Questionnaires to landowners with farming or grazing operations. Responding to this questionnaire is your opportunity to contribute to more accurate and equitable assessed values on agricultural property in Kootenai County. Questionnaires will be mailed again in the beginning of 2024 but you are welcome to submit an online AGRICULTURAL QUESTIONNAIRE form at any time or fill out the AGRICULTURAL QUESTIONNAIRE.PDF form and email to kctimberag@kcgov.us.

An explanation on AUMs (Animal Unit Month) and how to do your own calculation is provided in the USDA Technical Note (PDF).

CONSERVATION AGREEMENT/EASEMENT – a written document between a private, 501(c)(3) nonprofit corporation and the landowner which defines wildlife, flora or fauna or freshwater biota to be protected and outlines a minimum of a ten (10) year management plan to protect target species and to control noxious weeds in accordance with Idaho noxious weed law in chapter 24, title 22, Idaho Code.

(ii) Failure to file an application or progress report annually shall result in loss of the tax status. 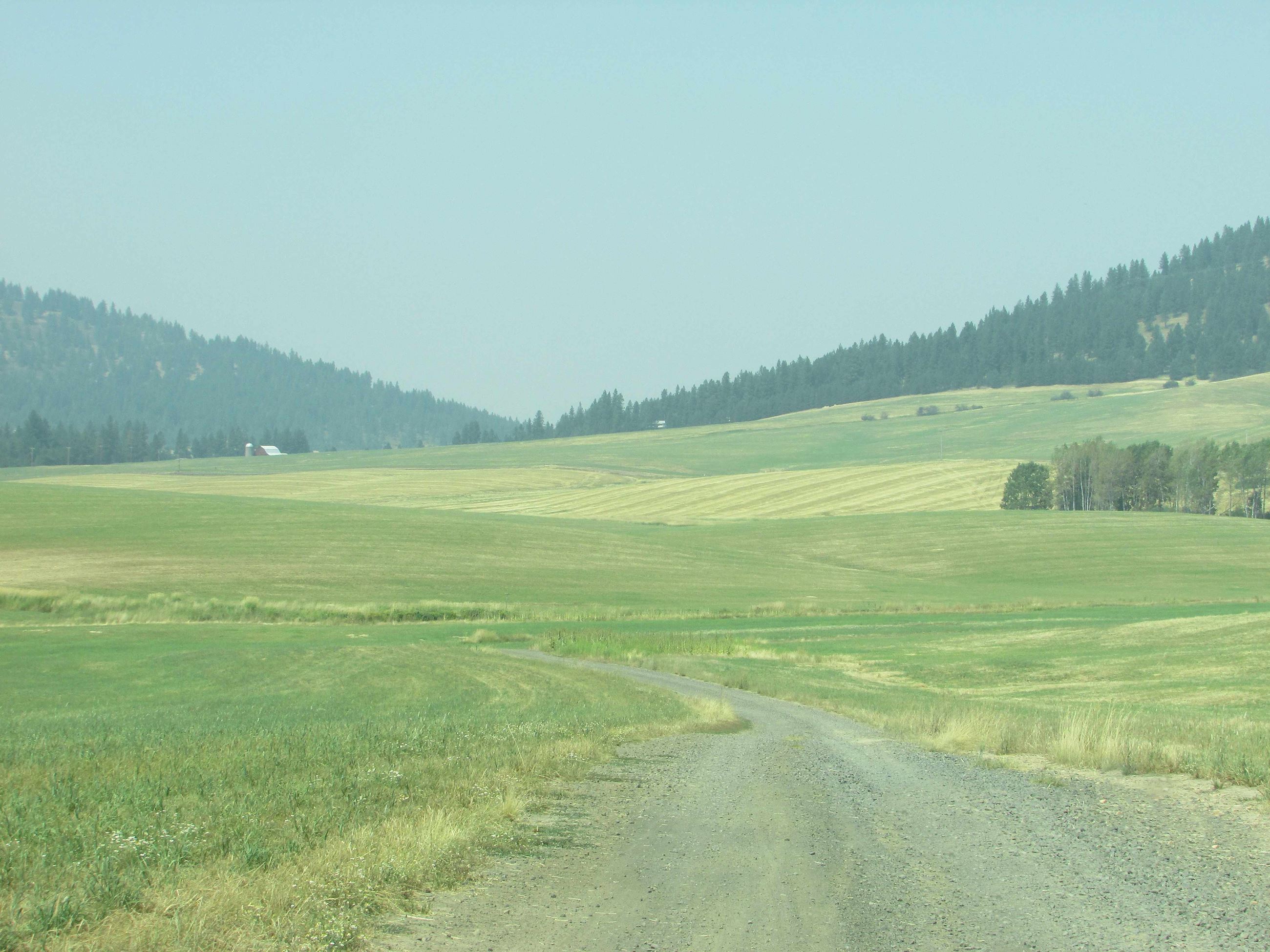 Call the Timber and Agricultural Department 208.446.1526 or email us at kctimberag@kcgov.us.