The Lewis and Clark expedition through central Idaho in 1805 was the first recorded exploration by people of European descent. By 1809 David Thompson established the Kullyspell House trading post on Lake Pend Oreille. The hunters, trappers, traders, and Iroquois guides who frequented the Kullyspell trading post reported that there were places in the far north and the east where people were teaching Christianity. In 1740, years before Lewis and Clark's arrival, Coeur d'Alene tribal leader Circling Raven had a vision and prophesied the coming of the Black Robes (priests).

In 1842, Circling Raven's prophecy was fulfilled when Father DeSmet arrived. The first Jesuit mission was founded in near St. Maries and then moved a short time later to its present Cataldo location. The Mission of the Sacred Heart (Cataldo Mission), located on the Coeur d'Alene River, was completed in 1853 and is the oldest standing building in Idaho today. Shortly after the Cataldo Mission was established, the military arrived.

The chapel, powder magazine, and one officer's quarters remain standing.

A community developed around the Fort, but it was not until the discovery of gold in 1883 to 1884 on Prichard Creek, on the North Fork of the Coeur d'Alene River, that many settlers arrived. Mining activity created an economic basis for future developments in timber, transportation, and trade in Kootenai, Benewah, and Shoshone Counties. The lasting wealth was not in gold but in lead, silver, and zinc, all of which required a large capital investment to process and mine. In 1883 the Northern Pacific Transcontinental Railroad crossed North Idaho. Rathdrum developed as an agricultural center and supply point for the mining district and remained a railhead until 1886, when D.C. Corbin built a spur line from the Northern Pacific mainline, at Hauser Junction, connecting to Coeur d'Alene. From Coeur d'Alene, passengers traveled by steamboat up the Coeur d'Alene River to the Cataldo Mission, where they boarded the narrowgauge railroad that carried them to the mining districts.

1889 marked the beginning of the steamboat era on Lake Coeur d'Alene when troops at Camp Coeur d'Alene built and launched the Amelia Wheaton. By the turn of the century the Inland Empire Railroad electric line train made several trips a day from downtown Spokane to Coeur d'Alene, where passengers boarded such steamers as the following for St. Joe City, Harrison, and St. Maries: 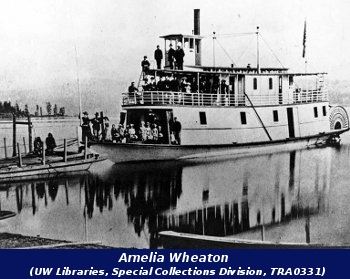 Sunday excursions on the shadowy St. Joe River were popular as were other recreational activities associated with the many lakes Amelia Wheaton (UW Libraries, Special Collections Division, TRA0331) and rivers of the area. After 1900 large lumber companies discovered the region's great stands of white pine. The waterways provided cheap and effective transportation for the logs.

In the spring logs were floated down swollen streams and rivers into sorting gaps on the lake and then on to the sawmills. The following boasted a large milling industry each:

By the mid 1920s the lumber industry began to slow down and many of the smaller mill towns disappeared. World War II saw improvement in the lumber industry; but the days of accessible timber and cheap transportation were over. The 1970s saw surges in growth and development in Kootenai County. In the early 1980s an economic decline affected both the forestry and mining economies. Today the County's economy is more diversified and has seen much growth and prosperity. The steady influx of the settlers impacted the indigenous population in many ways, most notably in the steady decrease in the land they had once occupied.

In 1873, the government, by executive order of President Ulysses S Grant, created a 590-000-acre reservation for the Schitsu'ums. In 1891 another executive order reduced this reservation by 190,000 acres, placing the upper third of the reservation into the public domain. This agreement was ratified by the U.S. Congress and formally established the Coeur d'Alene Reservation. Soon after the establishment of the Reservation, settlers established the community of Harrison at the mouth of the Coeur d'Alene River. Instead of removing the settlers, the federal government acquired the land from the Tribe in 1894 for $15,000. This land cession moved the boundary of the reservation south by one mile. In 1910 the Dawes Act allotted the Reservation tribal ownership of approximately 104,000 acres. The remaining land-over 240,000 acres-was placed into the public dominion. Shortly thereafter, American settlers obtained ownership of this property, without compensation to the Tribe or its members. Heyburn State Park was established between 1908 and 1911. The Schitsu'umsh residents in this area were evicted, and the $11,000 compensation for the land was used by the state to develop the park. Today the reservation is composed of some 90,000 acres actually owned by the Tribe and tribal members within the reservation boundary of some 345,000 acres.